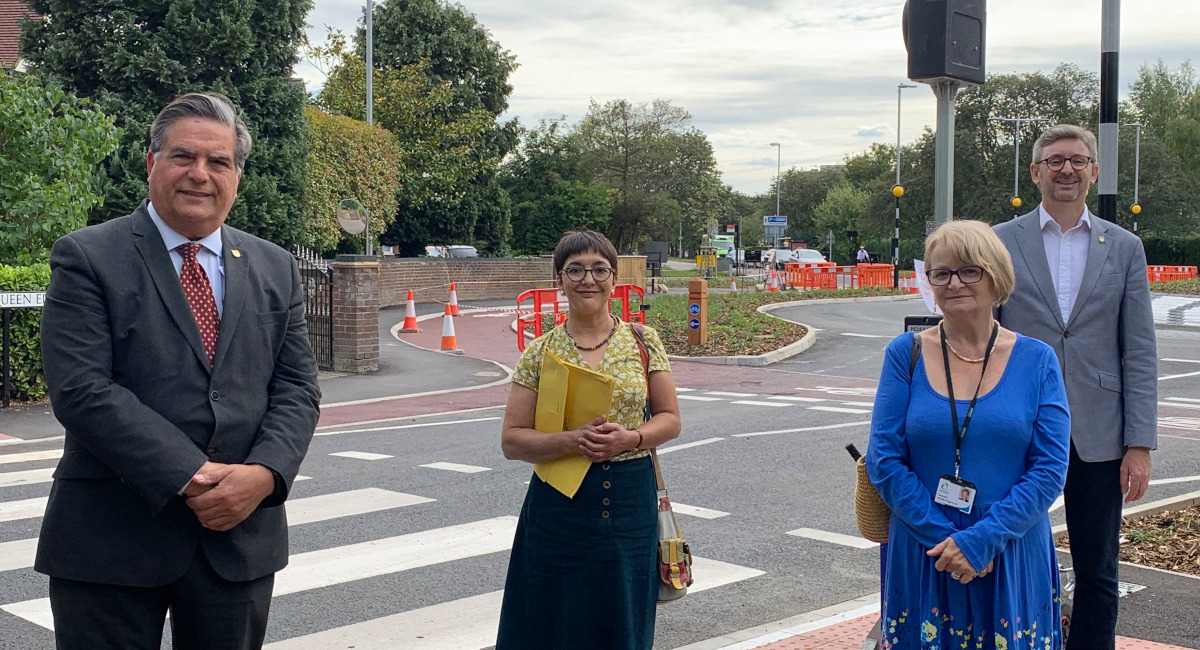 Liberal Democrat councillors in Queen Edith’s have welcomed the opening of the UK’s first fully Dutch style roundabout with cycle and pedestrian priority at the junction of Fendon Road and Queen Edith’s Way in Cambridge.

County Councillor Amanda Taylor said: “We have been campaigning for safety improvement for all of the junctions locally and for safe pedestrian crossings for many years, responding to calls from residents for improvements, so today is a proud day not just for current but also several former Queen Edith’s Lib Dem councillors .

“This design delivers not just an innovative safe cycling route but four new pedestrian crossings and reduces the speed of vehicles on the roundabout to further improve safety.

“The campaign for improvements at this site goes back nearly ten years, starting with requests for a pedestrian crossing on Fendon Road, then for safety improvements to the roundabout, which at the time had the second worst accident record of all roundabouts in the city.”

At the first of several public consultations, back in 2015, the public identified this roundabout as their top priority for safety improvements. At the 2016 consultation, a Dutch style roundabout was again strongly supported .

Councillor Taylor continued: “Delivering what the public asks for is always challenging when we don’t run the council, but we’ve worked in a collaborative, cross party way and I’d like to thank Cllr Bates and Cllr Kavanagh for their support.”

City Councillor George Pippas added: “Having been a councillor for nine years, my inbox was regularly full of people asking us for action to improve the walking and cycling routes to the hospital. We already delivered upgrades at the Addenbrooke’s roundabout and now also at Fendon Road, which is a unique design in Cambridge after we insisted that vulnerable pedestrians should have clear priority when crossing the cycle lanes.”

The design of the new roundabout was created in conjunction with the Dutch Cycling Embassy and Royal HaskoningDHV. The County Council have produced a YouTube video to explain how it differs from the old layout. It changes the road user hierarch, putting pedestrians first, then cyclists, then motorists. Motorists must give way to cyclists and pedestrians at the roundabout while cyclists give way to pedestrians. Cyclists and pedestrians must slow down before crossing to check that vehicles are stopping for them. The video can be seen below