Anatomy of a decision: why support parking in cycle lanes?

Why a cycle campaigner would support parking in an unsegregated cycle lane when a decision maker???

This is a blog post in response to a number of people who’ve asked the above question.  I believe I’ve got a great record in getting cycle and pedestrian friendly schemes implemented across my division, as well as staunchly supporting wider cycle/pedestrian initiatives across the County.

I also happen to believe in the politics of the possible – which doesn’t mean ignoring per sae the views of those who might think pedestrian cycle infrastructure has too much priority, whether I agree with that or not.

The answer to the question is that, the final decision is a compromise, and of course, I didn’t.

On the advice of a friend, I’ve put the summary first – the long detail is below, for those interested.

In summary, here’s a little table:

Unfortunately, sometimes one can only make a decision to support a thing as a whole, and this was the case here.  It isn’t possible at the decision on a TRO to add extra bits in, only to take things away.

In response to feedback, I wanted to clarify:  if I'd known the situation we'd end up with, and if I'd had the executive power, I wouldn't have gone along with the whole scheme.  I thought that was clear, but if it isn't, hopefully it is now.

Starting at the end – go and look at the water street cycle lane, that’s how they all should be – physically segregated, double yellow lined (yes I’m aware there’s an issue with enforcement here but that’s a slightly separate matter) and clearly marked.

That was something that happened because of me – it was shoe horned into part of another project and was achieved with the help of officers I empowered to do the same.

On the other hand, I instigated the project that led to the Green End Road cycle lanes being unsegregated and parking allowed in parts of the same.

So what gives?  Both were projects I was involved in, after all.  Simply put:  I had political control of one throughout to formal decision, but not the other.

I wouldn’t normally go to these lengths to explain my involvement in a project – to be clear, as a Councillor, I deal with stuff like this constantly, so time writing this blog post, and passing it via various people who might want to comment, is time I’m not spending doing other things.  That’s not to say it isn’t worth doing – but is to explain why it wasn’t a priority for me to get this blog post up.

Back in 2012 I started a campaign to “Green Up Green End Road” – it came out of wondering why it was called Green End Road, when neither end was, er, green.

This was a community up campaign, with meetings back in 2013 (see for example https://eastchesterton.mycouncillor.org.uk/2013/03/06/green-up-green-end-road-first-meeting-tonight/ ).

Over the next year I ran a number of local meetings, building up consensus around the project, as well as involving the local (Labour) City Councillors.

Back in 2014 I’d submitted a bid for Section 106 (planning gain) money to make the more major changes that came out of this to Green End Road;  at a meeting I resisted the rather derisory amount ( c. £100,000) on offer as it wouldn’t be enough to make fundamental changes, instead going for a c £20,000 feasibility study with the aim of funding the work from the then-nascent City Deal.

As this was a County project, as the relevant division Councillor, and the one who commissioned the study, officers came directly to me multiple times.

I provided the parameters, including prioritising pedestrian and kerb segregated cycle lanes, increasing green space and reducing space for cars, as well as giving direction to splitting the project into three phases – the first of which was meant to be the section between Nuffield Road and Milton Road.

This section was the largest, and most visible, and therefore the best to prove the concepts around fully segregated cycle and pedestrian paths, especially when that potentially included loss of on street parking.

Skanska were commissioned for the work by officers.  Twice I told the officers their plans weren’t good enough.

By August 2015 the City Deal had agreed funding for cross city cycling projects, which would take in this feasibility study.  It was around this time I started to have less contact from officers – having to chase them for updates, as well as them going (correctly in the sense of it being a City Deal scheme) to City councillors in the area at the same time.

To be clear here:  officers were following the correct procedure here, I’m not blaming them for not coming to me.

At this stage ( c 2015) it became apparent that a number of features were still missing from the project:

In common with a lot of Councillors, I know a lot of people in my division, and that extends to businesses as well as residents, and many who pass through the area (i.e., residents of other areas who ‘use’ my division).

Given that I’d discussed this with officers as not being viable in that form, I decided to support my local business, but collect data to decide if this was valid.  I suspected it would show customers visited those particular businesses from far and wide, as well as the local area – this was around March 2016.

There’s an oft-quoted idea that removing parking can help businesses:  this is true, but only in certain cases.  This (and the New York experience provides a wealth of case study here) is most effective where there a local centre – an area where people can congregate with a number of choice of shops;  the removal of large amounts of car parking makes ‘lurking’ there easier, more pleasant, and leads to impulse purchases.

That isn’t the case on this small section of road which includes a Fast Food restaurant and a Hairdressers.  Add to that the data from the petition we collected showing the hairdresser customers would be dissuaded if they couldn’t’ park – below is a screenshot of geocoded address from the first two pages of the petition[1]: 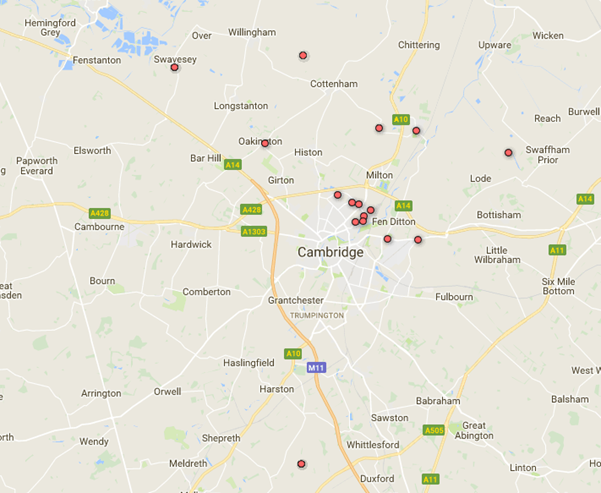 I think the overriding point I’m trying to get across here is that please do quote data at me but make sure you know enough about the data first.

Also to be clear:  this is a situation where I was envisaging banning parking everywhere else along that road.

As mentioned I, and the Liberal Democrat City Council candidate for that year, Shahida Rahman and the hairdresser had started a petition.

Cllr Peter Sarris, East Chesterton City Councillor contacted me indicating he was keen to work with us on this issue.

To say the east, Cllr Sarris and I have come to political blows on a number of occasions, and although I know we agree on some things we ‘d definitely regard ourselves as opponents on many.  That said, I regard Peter as a man of his word:  if he tells me he wants to work positively on something, I trust he will.

I discussed with Peter, and approached Cllr Lewis Herbert, the Labour group leader, and voting representative on the City Deal.  He agreed with the principles I’d outlined, and as I was working with Peter, offered to accept a compromise we could agree with officers, subject to the formal decision coming to the Executive.

There were a non-trivial number of meetings from that point – between Cllr Sarris and I, with the officers, onsite without officers.  We presented a couple of alternative options to officers asking for investigation:

…of which option 1 was preferable.

How did we get to the City Deal proposals voted through in July 2017?

Officers were, I believe, under pressure to get schemes through:  there is an existential angst around the City Deal  that we’ll lose the whole thing if all of Phase 1 doesn’t get delivered.  I don’t agree with that, but that’s beside the point as it isn’t my decision to make.

Between the consultants and officers the two alternative options weren’t worked up.  The TRO advertised wasn’t for double yellow lines everywhere else – I was sent this in advance, but admit I missed this detail due to mountains of other work, but it wouldn’t have been able to be changed at this point, and the end point was the TRO that went before the City Deal.

What’s next / what would improve things?

Decisions on Traffic Regulation Orders used to be made by Cambridge Joint Area Committee – a cross party committee of City and County Councillors who all represented City wards.  This meant more Councillors involved in decisions and crucially those Councillors were all closer to the residents affected, as well as independent of the City Deal.

Due to a Conservative/Labour amendment, this power was moved to the City Deal Executive a year or so ago.

That’s right:  the same 3 decision makers are proposing, funding, and dealing with objections to City Deal projects.  The City Deal Assembly does provide scrutiny, but the point is that CJAC was distinct from the City Deal structure, which provides a better check and balance.

So, all told, a self-proclaimed cycle campaigner, as a Cllr, did not support “parking in cycle lanes”.


[1] of 20 pages, and there are even more I never collected – I just can’t be bothered to type them all out