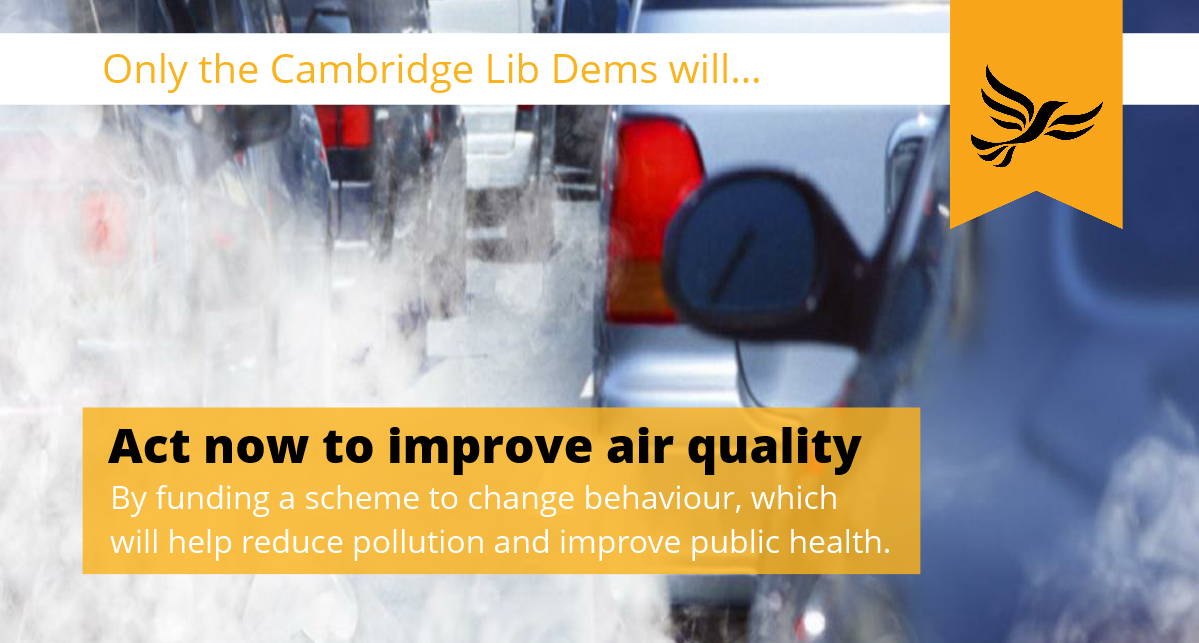 There are a number of known air pollution hotspots in Cambridge where legal limits are sometimes breached. The major contributor to these is motor traffic. Public health evidence has proved the relationship of poor air quality to early deaths.

Local Lib Dems are leading the campaign for measures to alleviate this threat, including getting public transport to switch to lower polluting vehicles. Indeed, after first rejecting our plan to incentivise taxi owners to move to electric vehicles, Labour has now agreed with it. And the first electric buses will soon be trialled in the city. We are pressing both reluctant Labour and Conservative leaders to work at reducing overall urban traffic by encouraging more use of public transport and discouraging private car trips.

The beneficial impact of these things is sadly likely to be long term. So, in the meantime, we will introduce an immediate campaign to educate and change behaviour now. Our target is the idling of vehicle engines while they are stationary and out of traffic: a damaging practice which isn’t legal, but happens all over Cambridge every day. London councils have pioneered campaigns which involve the public in promoting understanding and good driver standards, involving schools, workplaces, taxi and bus drivers. That is what we need here!

Lib Dem Environment Spokesperson Cllr Damien Tunnacliffe says: “The time is right to grasp this nettle and recognise that that the behaviour of any of us (if we ever drive) can help or hinder air quality. Spreading that word is really important, or we will lose vital years while lives get shortened.”

Clean air campaigner Anthony Martinelli, who is a hospital doctor, says: “This danger is very real. In my work at Addenbrooke's I see the vulnerable patients with lung conditions who are so threatened by breathing polluted air. If there is action we can take now, we must!”