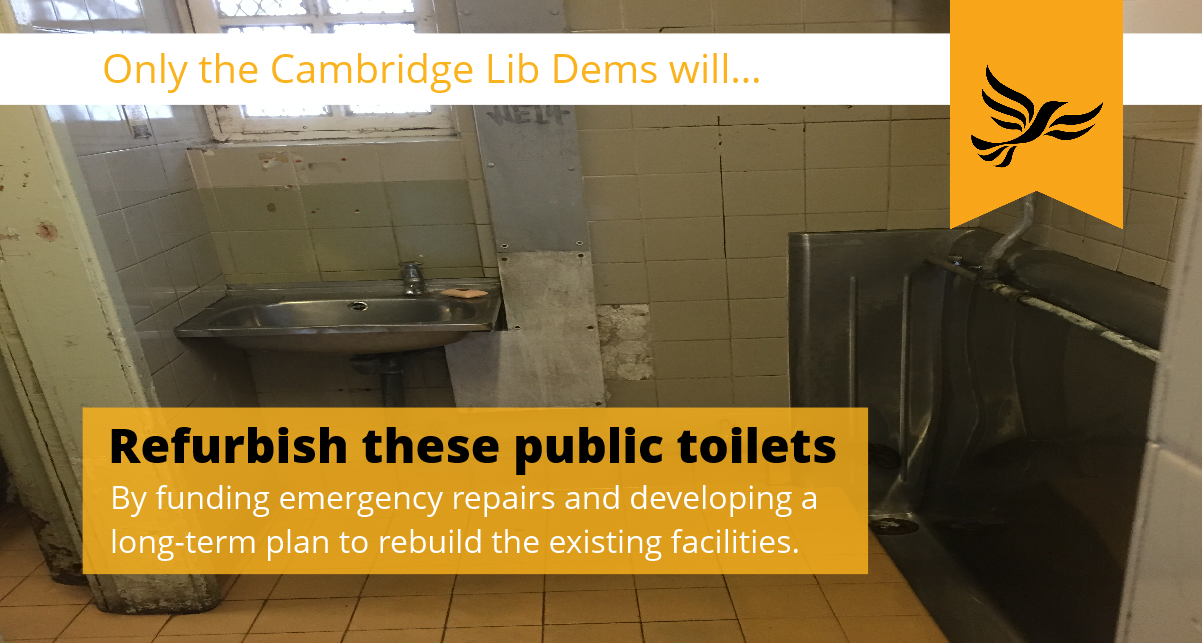 These public toilets on Jesus Green really are a disgrace to Cambridge. There should be an improvement plan in place and funding to get it started. Since a burst of publicity last summer nothing seems to have happened. So in our budget proposals, we are bringing forward the proposals that the City Council should have already been working on - and now needs to adopt with urgency.

The plan is in two parts. First an immediate maintenance intervention, to enable the toilets to stay open and meet at least some need in the short term. Second, the development of a proper plan for the redevelopment of the existing building - the Rouse Ball Pavilion - enabling more and better facilities to be provided on Jesus Green, including changing rooms, equipment storage and a source of refreshments. This will be a complex plan and may involve relocating the facilities to the Lido complex to share staff presence and avoid a spread of buildings over the green space.

Cllr Ysanne Austin, Lib Dem spokesperson on public open spaces, says: "It's a shame that the Council hasn't reacted at all since I raised the condition of these toilets last summer. This is one of the city's premier open spaces and the demand for these facilities is huge. The absence of work on a promised long term solution means that we now need a lot of emergency maintenance just to keep the facilities usable in the short term. The long term solution is likely to be several years off, so it's important that serious work on that starts now too."

Lib Dem campaigner and former councillor, Tim Ward says: "This is one of the city's most used public open spaces for recreation and leisure. The people using it frankly deserve better. When we ran the council the Lib Dems had a solid record of modernising public toilets throughout the city, witness Mill Road, Parker's Piece, Midsummer Common, Chesterton Lane and Lion Yard. It was badly needed after Labour's disregard last time round. We left a project to add Jesus Green to this list, which Labour sidelined in 2015 after they took over again. Priorities don't change, it seems. They also reduced budgets for maintenance and repairs, making it more difficult to arrest the decline of the current loos."