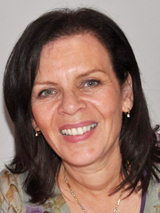 Born in London to Turkish-Cypriot parents, Meral Hussein-Ece went to state schools and art college, before her long career in local government, the voluntary sector and the NHS.

As a community development worker in the 1980s and 90s, she worked with women fleeing domestic violence, going on to establish the first domestic violence project for Turkish and Kurdish women. Meral was first elected councillor in Hackney, becoming the first woman from a Turkish background to be elected to a public office in the UK. She later became deputy leader, and served for 8 years.

She was then elected councillor on Islington council, serving as Cabinet Member for Health & Social Care. She was awarded an OBE in 2009 for services to local government.

Meral's work in equalities includes serving as a Commissioner to the Equality and Human Rights Commission from 2009 until 2012, and as Chair of Ethnic Minority Liberal Democrats 2006-10. She was Race Equality Adviser to Nick Clegg MP during the period 2008-12, and is currently the Liberal Democrats Equality Spokesperson.

Meral Hussein-Ece became the first woman of Turkish Cypriot origin to become a member of either house of Parliament, when she was appointed a Liberal Democrat working peer in May 2010. She will share with us her experience and political priorities for

Promoting Equalities and Social Mobility in Our Communities