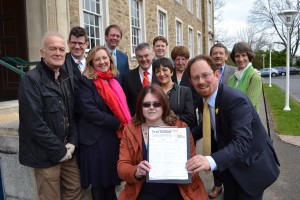 Cambridge MP Julian Huppert will hand over his petition next week demanding urgent investment for city pavement repairs just days after the government announced another £200 million for highway maintenance across the country.

The money, for which local authorities are invited to bid, was unveiled in the Budget and is on top of just over £9 billion being made available between 2011 and 2021.

Julian will join Paralympic hopeful, Claire Connon at Cambridge’s Shire Hall on Tuesday, March 25 to present the petition to Cambridgeshire County Council ahead of its full council meeting.

The petition calls on the county council to take urgent action on the state of the city’s pavements.

It forms part of a campaign by Julian with the support of rower Claire, who is tipped for a place in the 2016 Rio Paralympics, which has encouraged residents to log their complaints about broken and dangerous pavements on the website www.fixourpavements.co.uk

Julian launched the campaign after joining Claire and county and city councillors on a wheelchair tour of the city to see the problems for himself and raised the issue in a Parliamentary debate.

Transport Secretary, Robert Goodwill told him in a letter: “Local highway authorities have a duty to maintain their highway network in their area and this includes issues such as acceptable footway and highway surfaces.

“The 2013 Spending Round announcement in June 2013 committed the government to provide just under £6 billion to local highway authorities over the six year period from 2015/16 to 2020/21, this equates to £976 million a year. This significant investment highlights the government’s commitment to ensure that our local highways are fit for purpose.”

Julian said: “Our pavements are a disgrace and in some places, positively dangerous. People in wheelchairs, the disabled and partially sighted and those with pushchairs find some of the pavements impassable forcing them to walk in the road. This is totally unacceptable.

“The county council has invested some money in repairs but much more needs to be done. The government is making money available for maintenance and the county council needs to commit to a year-on-year programme of maintenance to bring our pavements up to an acceptable standard. But it’s not just about money – making sure that repairs and roadworks are finished off properly saves money in the long term.”