Huppert highlights power of cancer research to save lives 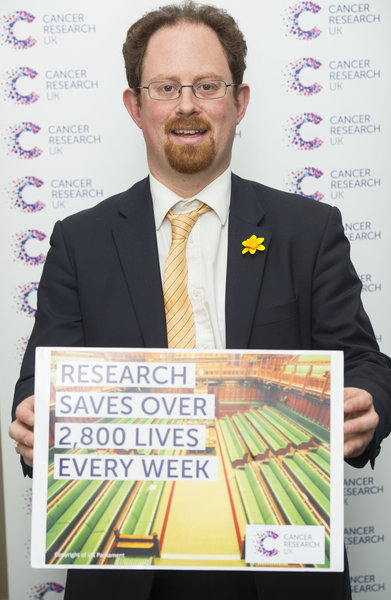 Cambridge MP Julian Huppert is backing a cancer charity campaign to show how the power of research saves more than five times as many lives each week as there are seats in the House of Commons chamber.

Julian attended a Parliamentary event organised by Cancer Research UK to highlight the fact that 2,800 people will survive cancer every week thanks to research.
Before being elected to Parliament, Julian worked in research aimed at identifying targets for new anti-cancer drugs.

“Research is vital if we are to understand more about cancer so that we can improve treatments and ultimately save more lives,” he said. “It’s important to visualise the scale of lives that can be saved, as well as the individual stories of family and friends.”

Every year around 30,300 people in the East of England and more than 330,000 people in the UK are diagnosed with cancer. Thanks to research, survival rates have doubled in the last 40 years. This means that 45 per cent of those people will survive the disease for more than 10 years.

Researchers at Cancer Research have played a key role in research leading to some of the landmark advances in treatment including Tamoxifen for breast cancer and Cisplatin for testicular cancer.

Cancer Research UK’s Head of Policy, Sara Osborne, said: “It’s great to have Julian’s support to highlight the power of research in saving lives and to raise awareness of how much more we need to do to ensure no-one’s life is cut short by cancer.

“Although more people are beating the disease than ever before, survival rates in the UK still lag behind the best in Europe for nearly all common cancers.”