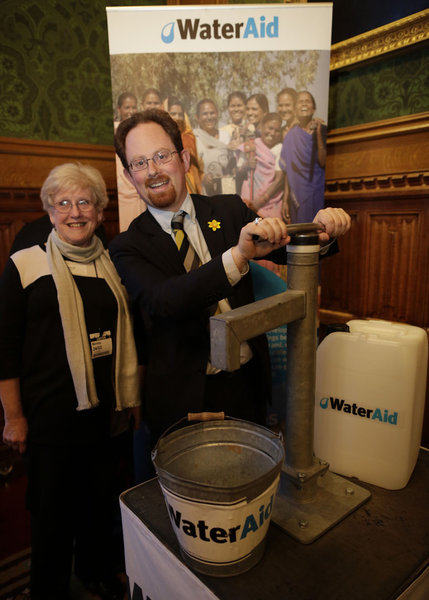 Cambridge MP, Julian Huppert teamed up with campaigners and supporters of a leading charity in Westminster to discuss the international water and sanitation crisis.

Julian and Witchford-based supporter, Dr Rosemary Westwell added their support to the Water Aid Everyone Everywhere campaign that calls access to clean drinking water and basic sanitation for all by the year 2030.

And on Saturday, March 29 Julian will be attending a charity dinner and auction organised by students at Cambridge’s Anglia Ruskin University to raise money for Water Aid. The event will take place at Downing College.

Organisers of Water Aid, an international development charity, told Julian and Dr Westwell how the water and sanitation crisis claims the lives of 700,000 children under the age of five every year.

Julian said: “This is an international tragedy that we can do something about. Children should not be dying for the sake of basic necessities in the modern age.

“It is good to see students from Anglia Ruskin University supporting this hugely worthwhile charity; I hope others will follow their lead so that diseases such as Cholera and other water borne illnesses can be consigned to the history books across the world as happened in our own country 100 years ago.”

The charity meeting in the Houses of Parliament came after Water Aid released a report showing that just a quarter of global water and sanitation aid gets targeted at the world’s poorest countries despite those countries being the most in need.

Water Aid claims that the UK has a good track record of making sure aid money earmarked for water and sanitation projects goes to some of the world’s poorest communities. This could serve as an important example to other governments attending the Sanitation and Water for All High Level Meeting in Washington DC, in early April it says.

Rhian Lewis, WaterAid UK Campaign Manager said: “This meeting in Washington DC could set the world on the historic path of ending water and sanitation poverty. With the support of MPs such as Julian we can ensure that the UK continues to lead from the front in tackling the international water and sanitation crisis.”