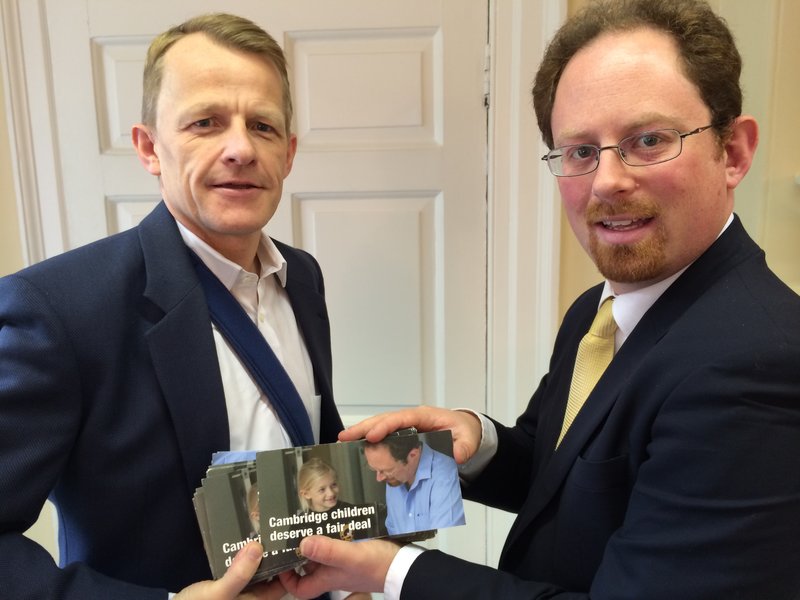 Cambridge MP Julian Huppert will today (Monday, April 28) push the case for extra funding for the county’s schools by handing in a petition of around 2,000 signatures calling on the government to implement proposals to give Cambridgeshire an extra £20 million.

He will hand the petition to the Lib Dem Schools Minister David Laws, who announced the provisional extra funding.

Signatures were collected online, through schools and by postcards for the petition which calls on the Government to provide the money to Cambridgeshire schools as quickly as possible.

It says: ‘For too long, our schools have been starved of money, receiving £600 less per pupil per year than the national average.’ It concludes ‘Please don’t leave Cambridge children shortchanged any longer’.

Tomorrow (Tuesday, April 29) Julian has joined forces with other MPs around the country to secure a debate on the proposed additional money, which has Cambridgeshire as the biggest overall beneficiary, with a 7 per cent increase. The consultation on the new proposals is due to end at the end of this week.

Julian will tell the House that while the new money is welcome, it is needed urgently and that there is a need for a real and sustainable fairer funding system beyond 2016 that will address the fact that Cambridgeshire schools have been starved of cash for 30 years.

“This is a hugely welcome first step in achieving parity across the board for our schools and our children,” says Julian. “But we have to go further if we are to compensate for 30 years of underfunding.

“We need cash for building projects so that our schools and classrooms can become welcoming fit-for-purpose environments which encourage learning.

“I want to make sure the government gives our schools this extra funding as a matter of urgency,” he says. “We are so close to getting the money we need to make sure our children get the education they deserve; I am not leaving anything to chance.

“For too long school funding has been based on historical data that hasn’t reflected the real situation on the ground and it has been our schools and our pupils that have suffered as a result.”

Our government has recognised that Cambridgeshire schools are at the bottom of the national funding league table,” he said. “Finally we have the chance to put that right; but I also want to make sure that this is only the beginning of sustained funding year-on-year to repair our school buildings and upgrade our classrooms to provide the learning environment our children deserve.”