MP Julian Huppert will find out how the government can better support research into type 1 diabetes after meeting young people and adults living with the disease at an event in Westminster.

Julian will raise the issue with Science Minister, David Willetts after discovering that 400,000 people in the UK – equivalent to more than 600 people in each constituency such as Cambridge – are living with the condition.

Despite the disease affecting so many lives, including those of very young children, charity JDRF, which raises money for research, claims government funding is falling.

Julian said: “I want to find out more about how the government can better support this research. This disease impacts on so many lives, not just of those suffering from the illness but their families and the country as a whole.

“It is important that we do all we can to support research into this illness to give people a better quality of life and ultimately find a cure.”

Sixty adults and children that live with the condition were chosen to attend Type 1 Parliament organised by JDRF at the Houses of Parliament.

The exact cause of type 1 diabetes is unclear, but it is not linked to lifestyle or diet.  A child diagnosed with it at the age of five faces up to 19,000 insulin injections and 50,000 finger prick tests by t 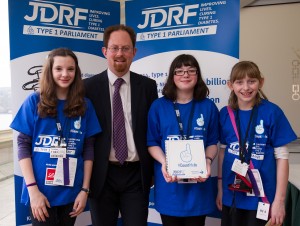 Julian is pictured with (from left) Sarah Warren, Katie Pole and Emma Bailey who are living with Type 1 diabetes.oing up and so is the cost – but UK Government spending on type 1 diabetes research is falling.  Thankfully, more people are now uniting on this issue and we can be hopeful of achieving significant change.”