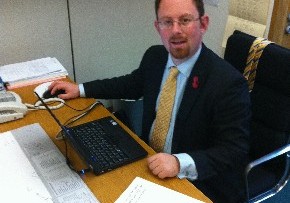 Cambridge MP Julian Huppert has won a battle with the Home Office to get a leading language school’s licence reinstated after it was suspended for no reason.

Studio Cambridge, the city’s oldest English language school for overseas students and an official TOEIC test centre, had its powers to issue visas revoked after another TOIEC centre was found to be offering fraudulent exams.

Despite making no formal allegation against Studio Cambridge nor presenting any evidence, the Home Office took away its licence for two months while carrying out a review.

Julian fought the move calling on the UK Visas and Immigration department (UKVI) to review the decision.

He had also raised concerns about the reputational damage inflicted on the school as a result of the decision.

And he had to intervene when an international student was detained at Heathrow Airport having been refused entry to the UK because of the action taken against Studio Cambridge.

Malcolm Mottram, Managing Director of Studio Cambridge claimed that he was certain the process would have taken much longer without Julian’s input.

“We are, of course, pleased to be exonerated,” he said. “However, we are disappointed that the UKVI publically suspended our licence, causing us considerable reputational damage, without any allegation being made or evidence offered.

“We are very grateful for the tremendous support we were given by Julian. He believed in us from the beginning and fought to have our case reviewed. That it has taken the UKVI nearly two months to undertake a very simple review is a disgrace; but without Julian’s help we are sure it would have taken longer.”

Julian said: “This was incredibly damaging not only to Studio Cambridge but also to our international reputation as a world leader in education for overseas students.

“Each time a student is refused a visa under these circumstances it builds a poor reputation for the UK and discourages students from seeking to study in the UK. This means we are in danger of missing out on the world’s brightest and most capable students who contribute to our academic reputation for excellence.

“These students are highly important for our local businesses not only in the money they bring in for accommodation providers and other service industries but also for our future economic success in attracting the best for our companies.

“It is incredible that the UKVI can come down in this heavy-handed way without any evidence to seriously hamper a school’s business and threaten its reputation.

“Clearly, we need to make sure that our immigration system is run properly and that schools which are targeting students in a fraudulent manner are rooted out and dealt with; but there is no excuse for the behaviour meted out to Studio Cambridge.”