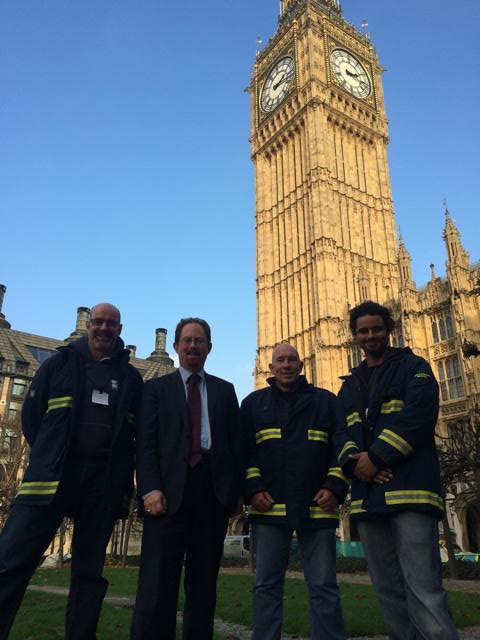 MP Julian Huppert is lobbying the Government to get a fairer deal for fire-fighters after they fear planned changes to their pensions could leave them thousands of pounds worse off in their retirement.

The changes mean that if fire-fighters are unable to achieve fitness standards at the proposed increased pension age they could be sacked with no job and no pension.

Julian met representatives from the Cambridgeshire Brigade Fire Brigade Union in Westminster to listen to their concerns and promised to act in a bid to try to solve a three year dispute which has led to strikes across the country.

Fire-fighters fear that the planned proposals could lead to up to 66 per cent of their members failing fitness tests between 55 and 60 resulting in them being sacked or losing a quarter of their pensions to which they personally contribute £4,000 a year. These statistics are drawn from evidence uncovered within government’s own review by Dr Tony Williams on the impact of the proposed increased pension age for frontline fire-fighters.

Julian has signed a Commons’ Early Day Motion calling for the new regulations, which were presented to Parliament last month, to be annulled.

He said: “We clearly have to find a compromise here. This dispute has been running for three years and we are no further forward.

“It is unacceptable for these men and women, who put their lives at risk to rescue others in dangerous situations, and their families to face hardship in their later years because we couldn’t find a better way.

“We need to look at all the options so that we can find a way to move forward and show these people the respect they deserve.”

“It is a fact that we are going to get older and as government’s evidence suggests the majority of people won’t be able to reach the levels of fitness required of a fire-fighter. But there are no transferable non-frontline jobs which will allow them to keep their current terms and conditions. That means that if unable to meet fitness standards the majority will lose tens of thousands of pounds from their pensions at the end or be sacked just for the crime of getting older.

“Cambridgeshire fire-fighters welcome and appreciate the support from Julian in this vitally important matter, through signing EDM 454 and backing the campaign for justice and a fair deal.

"We truly hope it will encourage other Liberal Democrat MPs to now also take the real opportunity to view the overwhelming weight of evidence and support their fire-fighters against the Fire Minister’s unfair, unaffordable and unachievable pension proposals."

Mr Matthews added that alternatives to Westminster government’s proposals had been offered to fire-fighters in Scotland, Northern Ireland and Wales with a view to protecting them. As such, fire-fighters under the devolved governments had not taken strike action following receipt of these alternatives.

“Currently only English fire-fighters are in this position,” added Mr Matthews. “We are perplexed as to why the Prime Minister cannot offer us these options or similar.”