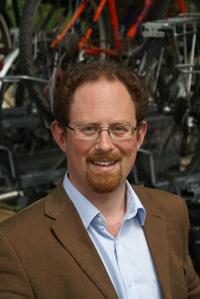 Cambridge MP Julian Huppert is pushing for a cycling and walking investment strategy to be written into new laws governing the country’s infrastructure.

Julian, Co-Chair of the All Party Parliamentary Cycling Group, wants changes to the new Infrastructure Bill to make a long-term commitment to cycling and walking.

He is sponsoring an amendment to the Bill which comes before Parliament on Monday, January 26.

It is the last chance for changes to the Bill which includes a commitment to road investment but nothing similar for cycling and walking.

Julian, who led the cross-party Get Britain Cycling inquiry and the subsequent report calling for year on year investment in cycling said: “I want to make sure that future governments give cycling and walking priority on their spending plans. The only way we can be certain that will happen is to write it into legislation.

“It is so important that we have a long-term strategy if we are serious about promoting cycling and walking. If we are to tackle the obesity crisis in our country we must encourage people to follow healthier lifestyles. Cycling and walking are two excellent activities, costing very little yet promoting a healthier way of life and a greener environment.

“In fact, a recent study has revealed how a 20 minute brisk walk a day could add years to a person’s life expectancy; there has never been a better reason to commit to long-term investment in this area.”

Julian wants a strategy put in place which would be reviewed at least every five years.

It has also secured support from a dozen MPs so far from across the parties, including former Cycling Minister, Norman Baker.