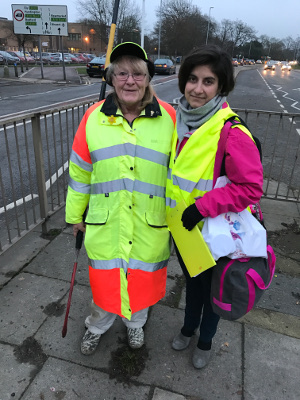 Following sustained campaigning and community pressure, the council have agreed to change the lane layout so that cars going straight on on Newmarket Road will use the left hand lane. This will allow visibility of the crossing before cars enter the roundabout and move the cycle lane over to the left, where it should have been from the start.

Congratulations to everyone who signed our petitions and came to the demonstrations and made community led politic real in Abbey.

And there is so much more to be done in our area. Let's get started together right now. Sign up below for updates.

Following the removal of lollipop staff from the Newmarket Road crossing there is now a greatly increased danger to children crossing Newmarket Road at peak times. We are calling for ground-level planting on Newmarket Road / Barnwell Road roundabout to improve visibility to try and protect our children and vulnerable people.

On only the second day back at school since the lollipop lady and man on Newmarket Road were removed, a group of children and adults had a very lucky escape. Liz Eaton of Ditton Lane, who uses the crossing every day with her two young children was forced to play the have-a-go hero when a car failed to pay any attention to the red light at the crossing as it accelerated away from the roundabout.

Liz said afterwards “There were around 6 children and 4 adults on foot and bikes waiting patiently to cross on their way to school.  The green man appeared and we all stepped or cycled out into the road, but then I caught sight of an approaching car which had swung off of the roundabout and wasn’t slowing down at all for the red light. I had to scream at everyone to stop.  Luckily the driver finally realised that the lights were red, and that there were 10 people in the road in front of her and slammed on the brakes, stopping just in time, but it was a real heart in mouth moment – particularly as it was really icy.   She mouthed sorry….but sorry wouldn’t have cut it if she’d mowed down 10 people.”

Abbey campaigner Nicky Shepard is now calling for the planting on the roundabout at the Newmarket Road and Barnwell Road junction to be reduced to ground level to improve visibility as traffic crosses and exits toward the unmanned crossing.

Nicky said “It’s a perfect storm. They’ve sacked the lollipop lady and man at a crossing that can’t be seen by cars crossing this notoriously dangerous roundabout. Someone is going to get hurt very soon if action is not taken. Improving visibility across the centre of the roundabout seems like a sensible step.”