Julian teams up with scientist through unique pairing scheme 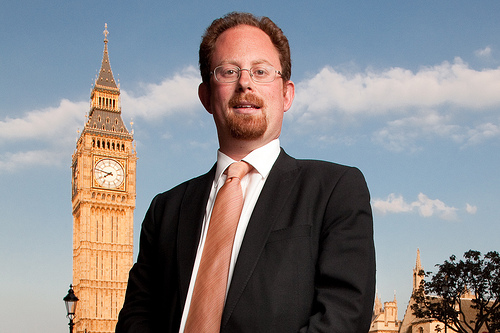 MP Julian Huppert is teaming up with Cambridge scientist, Dr Sadia Ahmed as part of a unique pairing scheme.

Sadia, who works for Cambridge-based Microsoft Research will shadow Julian for the week in Westminster beginning with a reception yesterday (Monday, November 24) attended by MPs, Peers and civil servants taking part in the scheme.

Later Julian will spend time with Sadia at Microsoft Research to find out more about her job and the work in which she is involved, where she used computational systems to understand the effects of deforestation.

The pairing scheme is run by the Royal Society – the UK national academy for science - to give parliamentarians the opportunity to be better informed about science issues and for scientists to understand how they can inform science policy.

Julian, who has taken part in the scheme in previous years, said: “This is a hugely worthwhile initiative which gives parliamentarians the chance to find out more about science and research taking place across the country and how it could influence the decisions they make.

“It is really important that we use evidence to inform policy but there are few parliamentarians who have a really good understanding of science. Having first-hand experience of how science works on the ground will hopefully improve that understanding and how relevant it is to the world in which we live.”

Sadia said: “I believe that policy should be based on sound scientific evidence. Having said that, it is important that scientists understand the policy domain if they are to even hope to provide useful and appropriate outputs from their research.

“We are taught well how to communicate findings to each other through peer review and conferences, but rarely are we taught how to engage with policy or the wider public. Through the scheme I hope to gain a better understanding of where and how science fits into British policy.”

More than 300 pairs of MPs, civil servants and scientists have been partnered up since the scheme was launched in 2001.

Sir Paul Nurse, President of the Royal Society said: “We live in a world facing increasing challenges that can only be addressed with a clear understanding of science. From climate change to outbreaks of infectious diseases, GM organisms to technology and security, our policy makers have to make decisions about issues that will affect the lives of all those in the UK and, in many cases, the global community. This means policy-makers and scientists have a responsibility to engage with each other to get the best possible scientific advice into public policy making.”