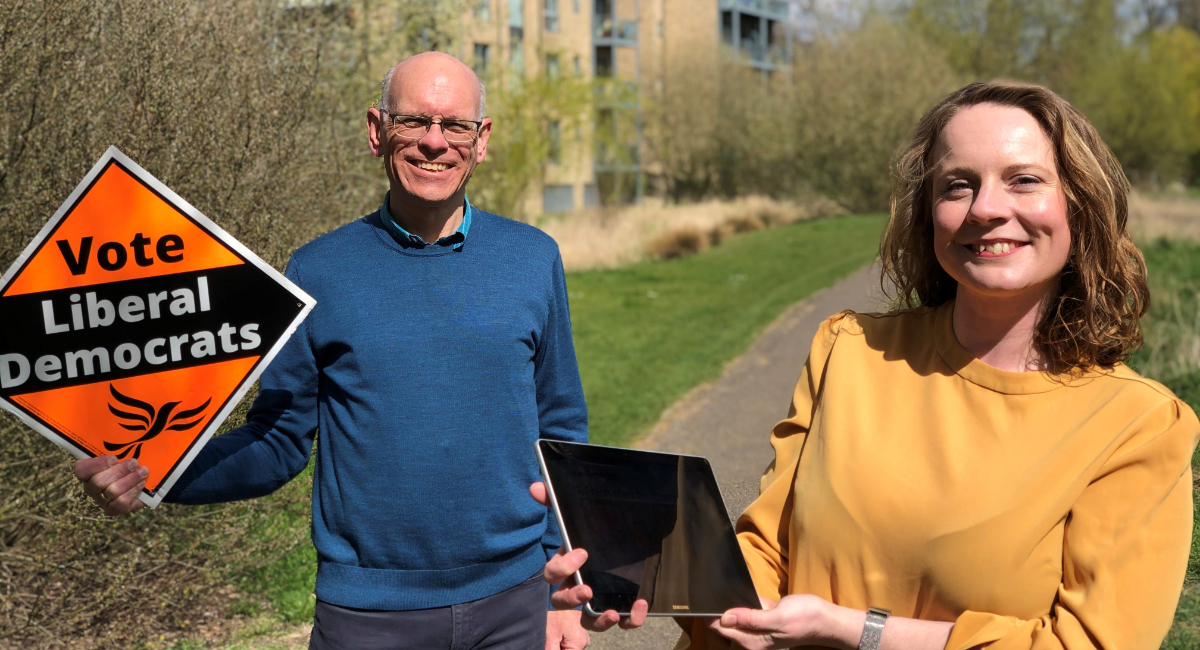 “A stronger Lib Dem presence won’t put everything right, but it would be a step in a positive direction for the city. It will send some important messages. It will strengthen democratic accountability and it will guarantee debate and challenge, preventing any sense that there is only one point of view that matters in Cambridge. The focus for residents this time is on candidates who will make the best advocates for their areas and will be raising the right issues for them.”

“We want an inclusive and green city. To maintain a balanced community and the vitality of our local economy, we would enable new homes and jobs based on rigorously assessed need. BUT we’d do so on terms that conform to our priorities to fight climate change, safeguard our local ecology and the historical and landscape character of our setting. If not, we’d say no! We reject the false opposites both of those who chase housing numbers at any price and those who fight development at any price.

“We support development on the highly sustainable sites at North East Cambridge and Marshall’s airfield. BUT we demand carbon neutral building standards, a solution to the local water crisis, at least 40% social, affordable or key worker housing, high quality transport and the amenities essential for attractive, liveable communities, which also regenerate surrounding areas of the city. We also want tougher planning enforcement to ensure developers can’t overstep the mark.

“We therefore take issue with Labour’s current plan to re-allocate important new recreation and sports amenities arising from the North East Cambridge development to entirely different parts of the city, when they could assist in levelling up health inequality in the north of the city. We also oppose Labour’s outrageous target marketing of new homes on council land to overseas financial asset investors, designed to inflate prices and frustrate the needs of those who want to live and work locally. And we want to see an end to Airbnb-type businesses gobbling up residential properties uncontrolled across the city.

“We want to tackle the gaps in local climate change leadership: the provision of on-street electric vehicle charging points, a citywide food waste collection service and the insulation of homes – both investing in those the council directly owns and providing advice and encouragement to private owners. Labour has said they don’t want to talk about these things. We’ll continue to develop transport policy with partner councils to discourage private car use in return for big improvements in public and active transport – tackling altogether congestion, pollution, climate change and the quality of our street environment.

“We will sustain Cambridge’s open, liberal stance to the world. We would aim to welcome and support refugees of the terrible war in Ukraine, as we did to those fleeing Syria.

“The expansion of new businesses attracting high level skills has brought prosperity to Cambridge, but not to everyone. It is valuable to those businesses, as well as to everyone else, that the city offers equal chances for everyone to contribute and benefit. We’d like to involve business leaders in supporting a Cambridge Community Cohesion Fund to target support on local ‘levelling up’ measures. And we want the council to adopt a citywide wellbeing strategy to measure all its decisions and to drive priorities to reduce all types of disadvantage. We would expect this to include the tragedy of individuals who live on the streets, where we would seek a new approach from the health services to help tackle the mental health and addiction problems which make progress difficult.

“And we’d want to address the serious problems in the council’s own back yard in responding to residents. Whether it’s planning issues or waste collection problems or maintenance of council homes, people find it hard to make contact and get satisfaction. Complaints are 85% higher under the current Labour administration than when they took over 8 years ago. We will continue to put the basic operational performance of the council under the spotlight and seek better for residents.

"Our approach in total makes for an Inclusive and Green Cambridge and a council that works better for people. It makes the Lib Dems the local, positive choice on May 5th.”