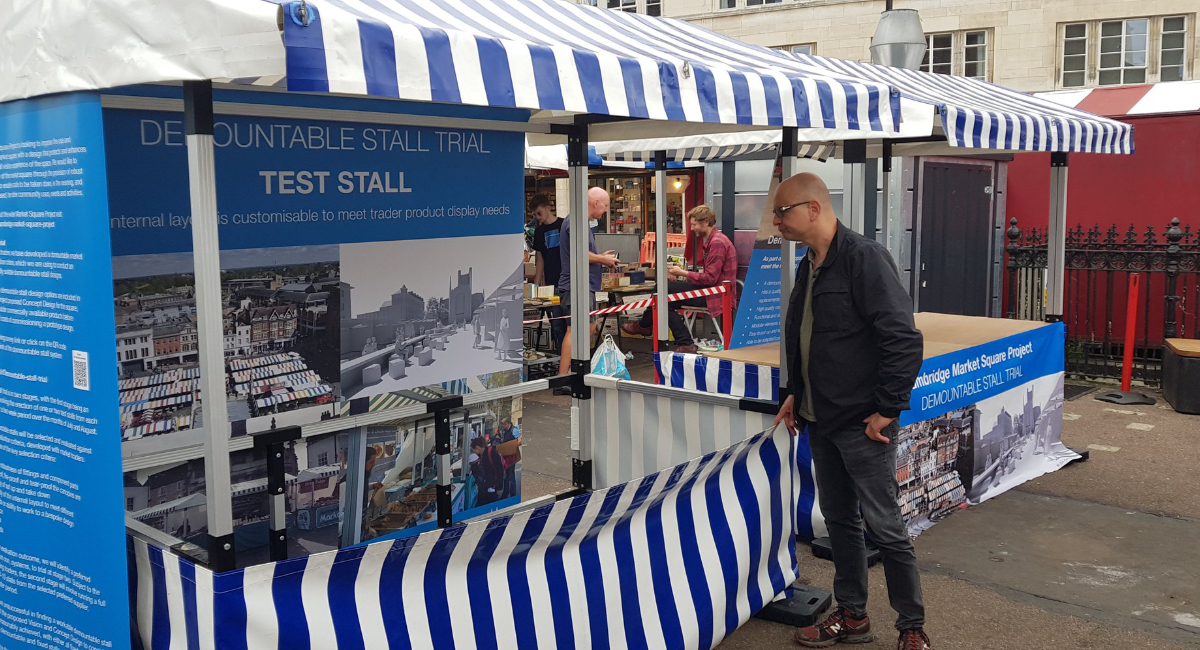 The Lib Dems have expressed disappointment this week, after the long awaited proto-type demountable market stalls arrived at the market for testing to less than lukewarm reviews from the market traders.

The model demountable stall forms an additional step in the ongoing consultation on the market square redevelopment project. This rests on a new vision for the market square, which includes a number of the stalls being demountable, so they can occsionally be taken down in the evenings for events.

After sustained pressure from opposition Councillors, a proto-type stall has finally arrived for shoppers and traders to view, but may traders have already make it clear that this is not a viable alternative for their businesses.

Cllr Cheney Payne, Environment, Communities and City Centre spokesperson for the Lib Dems, explained the pressure that had been needed to persuade the Labour-led City Council to allow traders and shoppers to see and test the new stalls.

Cheney said: “When the consultation first opened, the Labour Council’s plan was to leave the stalls until a much later stage of detailed design. However, the demountable stalls are integral to the market square redevelopment succeeding, both to keep a suitable space for the market traders to work, and so that collapsing and storing them for occasional evening events is easy enough to keep our seven-day market. There were so many questions about the stalls which were not answered: how weather-proof they are; whether they will stand up to the wind in the market square, and how much shopping and trading time will be lost due to the parts of the market closing early to take the stalls down. After concerted pressure from us and the market traders, the Labour Executive Councillor has finally agreed to source an example of a stall which is currently on display on the market, and will launch a second phase of consultation on this in due course”.

The response however, has not been positive. Market ward Cllr Katie Porrer observed: “Although the design of the stalls looks very similar to our current market, the substance is very different. The trial stall is incredibly flimsy and small, and is already rusting after only being out in the open weather for a week. It looks more suited to a Punch and Judy show than a seven day a week all-weather market.”

“We are also very concerned that pop up stalls were never a part of the consultation which has always focussed on permanent stalls which could be taken down once in a while for special events.  Something that needs to come down each evening and be put up again the next day would just add to the traders’ hours and make our open air market look and feel temporary which is something that Labour have always claimed was not their intention.”

Cllr Olaf Hauk, who asked the Labour Council at the full Council meeting in May to extend the consultation to allow for a proto-type stall to be developed and tested, is urging the Executive Councillor to engage with the market traders to first understand their individual business needs, before pushing forward with a stall design that is not fit for purpose. Cllr Hauk added: “The problem with this consultation is that it seems to start by assuming that demountable stalls are compatible with our market square, and a seven-day a week market. If the market traders are telling us that this simply isn’t possible, no amount of consultation will make unworkable stalls workable. Labour need to be prepared to rethink their initial design for the market square if the demountable stalls do not work, and consider more flexible solutions such as a mix of permanent and demountable stalls to meet the needs of different market businesses”.

The Lib Dems urge the public to respond to the specific consultation about the market stalls when itopens, and are working closely with the Cambridge Market Traders Association to ensure their views are heard, and they have chance to test the stalls properly in all weathers, before any decisions are made about the future of our market.