Further to the work I've done with residents (including 3 meetings, 2 complete letter drops of the estate and a survey) I'm pleased to announce there is progress on the proposals for parking restrictions that Labour Councillors were keen to push through.

I hope residents agree that I have ensured that they've been listened to and have worked with them to achieve a sensible way forward.

North of Milton Road (outlined in red below)

Labour's Councilor for Arbury, formerly the Councillor for West Chesterton, still wanted to press ahead, so I proposed splitting up the areas, creating two new Chesterton zones look like that shown below.  i.e. the non Chesterton divsion parts have been moved into a new third zone.  Note that I have asked for Arbury Road and those satellite roads to be added. 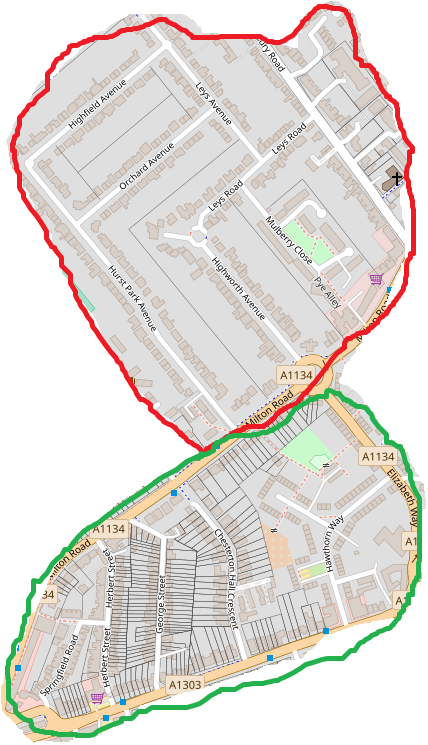 Update 2017-11-13:  note that the papers for Highways & Community Infrastructure Committee (the County Committee in overall control of this) show the old boundaries - this is simply because officers couldn't update things in time for the committee meeting.  There is a clear note in the paper to say that boundaries are indicative only.

After doing a final survey from updates there is a clear view that waiting to see what happens as other schemes develop is the consensus way forward.  As of 2017-11-12 14:20 the survey results were:

Although this looks close, looking at the respondents they were also split between those who had attended one or more workshop (answering mostly A) and those who hadn't (answering mostly B).  I will follow up with those who answered B to see if they want to do some more work on this in the new year, but I have advised officers that for now, we will not go ahead with a parking control scheme.

The 'Triangle' (or "irregular rhomboid") area (ringed in green)

Working with activist Jamie Dalzeell and other Lib Dems, I'm still surveying this area to ensure residents are aware of the impact of the proposed parking restrictions.  I've not yet decided how to proceed, but it is likely I'll run at least one public meeting as the current survey results are:

As you can see there is a narrow majority in favour of going ahead, a significant amount of people asking for workshops.  There is a less obvious correlation between those spoken to by me or a fellow volunteer and those not automatically choosing B.  That said, assuming it does not come to affect whether an implementation in a January batch can go ahead, I feel it worth running at least one workshop, open to all, but particularly aimed at those who answered C or A.

I am waiting on when I need to make a final decision on the Triangle scheme from officers, i.e. for it to go ahead in Jan Feb - this would be when the formal process starts - a letter from the Council stating the intention to go ahead with a scheme and inviting comments.

This is followed by the advertising of  the Traffic Regulation Order (TRO) and an eventual report to Cambridge Joint Area Committee, when it will be voted on - this meets in January, April and June 2018, so it is likely to be the latter of those two dates where the final decision is taken.

For the Hurst Park Area zone, this will go to the back of the queue of City Schemes and I will continue to monitor with residents as other schemes are implemented.