Section one:  trees, but not very many

In the first section we were presented with pictures of some "narrow trees" and some "bigger trees".  I'm no technical expert on trees, but immediately I had questions about the choices I was being asked to make.

The divide was said to be because the road narrowed at the Arbury Road junction.  This is true, but it widens again after that - so this seemed an odd statement.

A City Council tree officer was on hand, and gave a presentation to introduce various examples locally.  He explained "Semi Mature" (REMEMBER:  this is a climb down from the original promise of "Mature") trees would be around 4m in height.

Would all the trees be 4m when planted?  Do they all grow equally?

That officer and another talked about the restrictions on space available giving restrictions to the sort of trees that were possible.  Where was the trade off?  How much are the much criticised bus lanes meaning we cannot have better trees?

Despite not knowing much about trees I could see that the selection was extremely limited:  most seemed quite 'manicured', aside from one;  as others pointed out, no London plains as seen in the centre of town.... 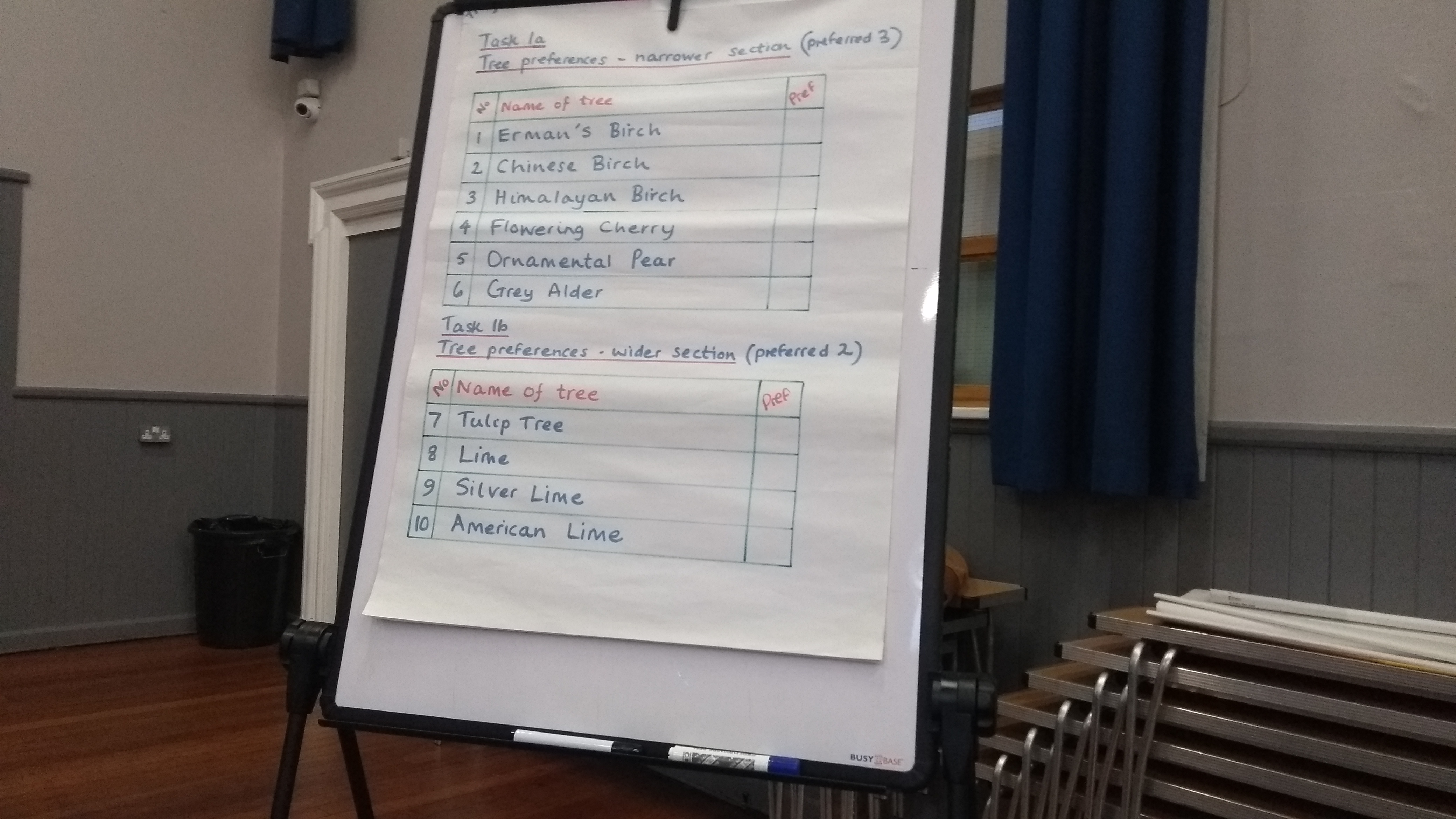 None of the officers present was involved in the Eddington development, or Cambridge North station:  both have had extensive tree planting.

Most groups objected to the lack of choice of trees.

(the term is mine)

Each table was given one of four areas the officers had identified to "transform":  our area was around Milton Road Library. 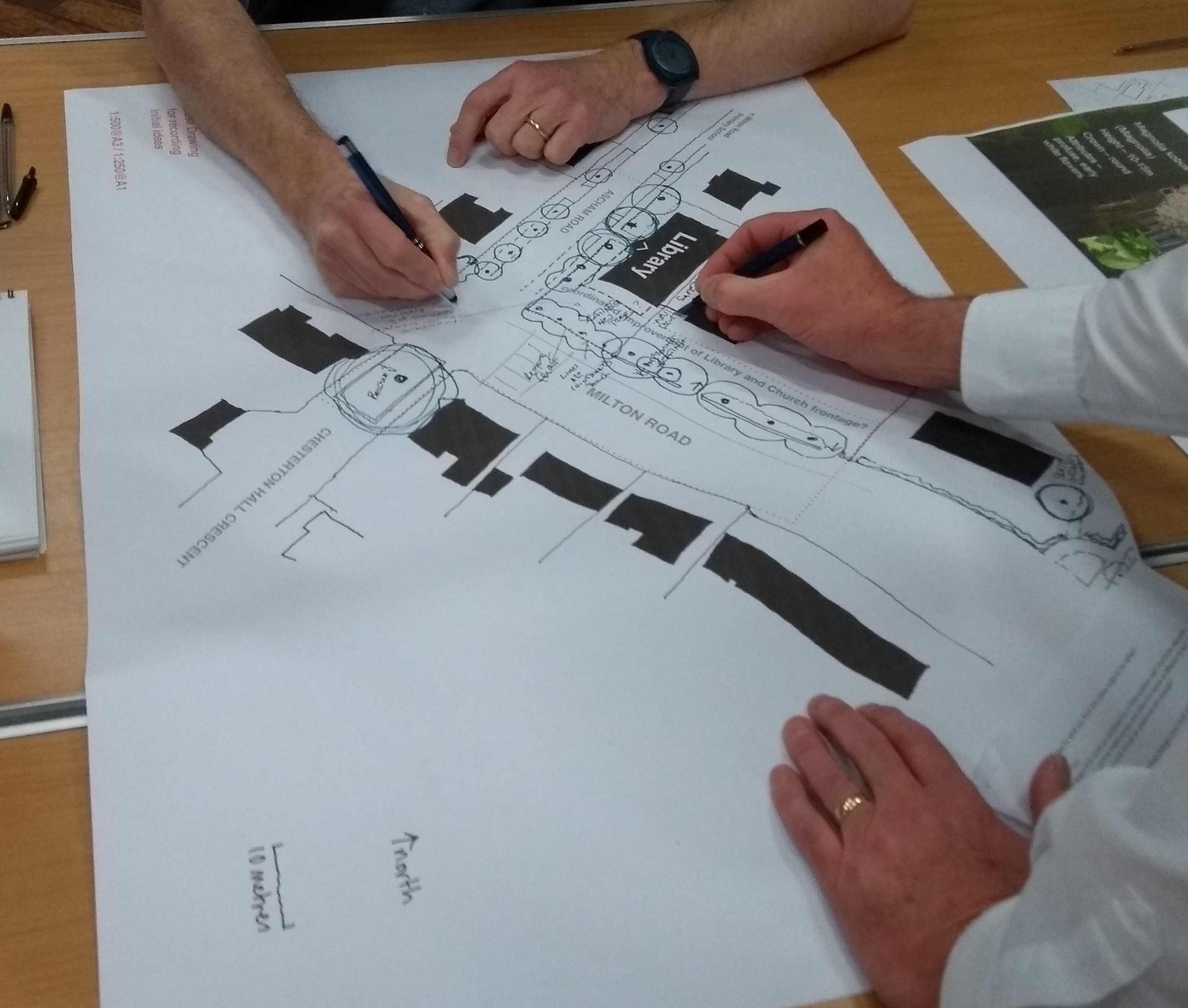 It was a bit imprecise as to what they were wanting feedback on:  eventually I suggested being really radical with the area we had and themeing the entire streetscape around books/libraries.  Image the road and pavement surface being lighter, with images evoking learning - like the DNA Cycle path in the South of the City, but more ambitious - and street furniture similarlily themed.

Others added to this with suggestions to open up the front of the library.

Sadly again we had to point out that the trees couldn't be altered because the Catholic Church owns them - why wasn't this considered before?

We also pointed out that the small planted area between Milton Road and Chesterton Hall Crescent wasn't really part of the same area - especially if safety was the primary concern, it being a school route.

It is no secret that I'm critical of the overall scheme, and the City Deal's ability to consult properly and imaginatively, so went into this, after the previous workshop, feeling very cynical.

I've interacted a lot with the tree officer and know him to be a good, dedicated and capable officer, so that is a positive.

Once again though, we're offered a consultation that feels like it is really asking for us to choose between a narrow set of options that can't possibly interfere with the overall scheme.  Where are the really ambitious plans for an amazing entrance to Cambridge?  Task 2 felt like it could have been that - but I'll be amazed if any of the ideas make it through the process.

Until I'm convinced the City Deal really wants to improve the area, rather than just spend money and complete the project - which means realising it cannot meet the original original objectives in some ways - I'll continue to oppose what feel likes attempts to get residents to agree with things they don't want and don't need.